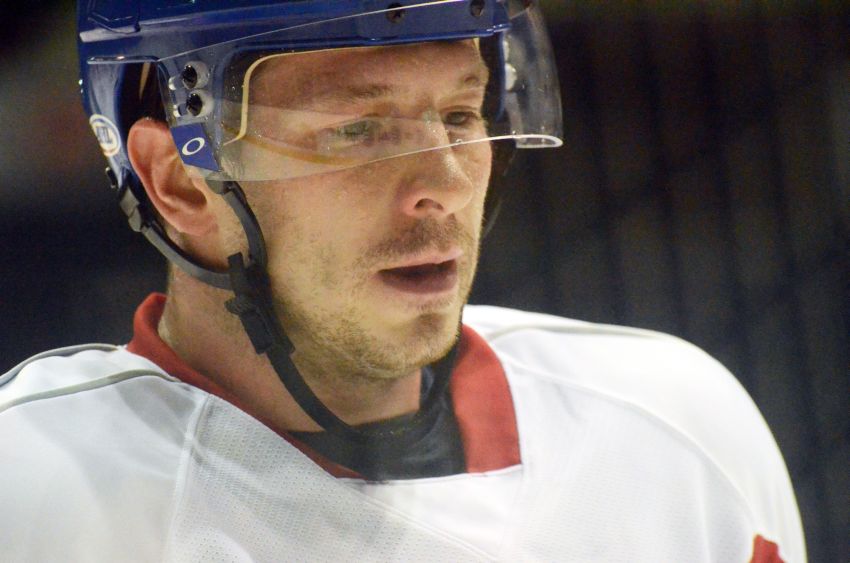 ROCHESTER – Kevin Porter, the former NCAA superstar, had finally established himself as an NHL regular after shuttling between the big leagues and minors for two years. In 2010-11, the 26-year-old played 74 games with the Colorado Avalanche, scoring 14 goals.

By last October, however, the Rochester Americans’ new captain had already become a spare part.

The forward played poorly defensively, never showcased enough physicality and couldn’t regain his collegiate scoring touch. He sat 14 of the Avs’ first 19 games and 19 of the final 22.

Coincidentally, he made the last of his 35 appearances March 14 in Buffalo at the First Niagara Center, where the Amerks host the Hamilton Bulldogs tonight, a game the team recently moved from the Blue Cross War Memorial because of the NHL lockout.

“I mean, it’s kind of tough, but this is the NHL right now,” Porter said following the Amerks’ opening-night win Oct. 12. “I feel lucky to be playing. So I’m happy to play games and to play on this team. It’s a great team, a lot of great guys. So it’s a good situation.”

Porter’s presence immediately impacted the Amerks, who needed a captain after the Sabres didn’t re-sign Colin Stuart. Amerks coach Ron Rolston awarded him the “C” just 11 days into training camp, something Porter, a captain his senior year at the University of Michigan, called “a great honor.”

“I just like to lead by example,” he said. “I go out there and work hard every day and hope guys follow and get guys focused. I’m not going to yell and scream at others guys.”

“Everyone knew what his situation was and how many games he had and how he played in Colorado, too,” Foligno said. “I remember playing against him. I think right off the get-go everyone just liked him, and everyone kind of just found a niche with him.

“He wasn’t afraid to talk to young guys and get in the mix with the middle-aged guys, too. He’s just a great captain and a really hungry guy.”

Porter dazzled during his last run as a captain in 2007-08, scoring 33 goals and 63 points in 43 games and winning the Hobey Baker Award, college hockey’s Heisman Trophy. His four-goal performance against Niagara University in the NCAA Tournament set a record. The Wolverines later earned an NCAA Frozen Four berth.

But Porter’s professional career hasn’t gone as smoothly. The Phoenix Coyotes, who selected him 109th overall in 2004, shuttled him between the AHL and NHL for two years before trading him to Colorado in 2010.

Just when it seemed like Porter had cemented a spot, he sputtered last season.

“You’re definitely learning lessons, in or out of the lineup, so I learned things that I needed to do better, and in practice I worked on things,” Porter said about 2011-12. “I don’t think it was a great situation but I made the most of it.”

Porter liked the Buffalo organization from top to bottom, and knew Rolston a bit from the USA Hockey developmental program in Michigan, where he grew up.

“Everything about it seemed like a good fit for me,” said Porter, who signed with the Sabres on July 5.

If the season ever starts, Porter, a veteran of 163 NHL games, seems like a strong recall candidate. He can skate at center or wing. Right now, he’s playing center again regularly for the first time since his senior year.

“He’s got a lot of experience. He’s a leader,” said Amerks winger Mark Mancari, Porter’s linemate recently. “He’s played in the NHL a long time. He was a captain in college as well. When you have a guy that’s been in the NHL for that long, it just shows.”

He added: “He’s probably one of the smartest players I played with, not only offensively but defensively. He’s a great skater.”

A shoulder injury has sidelined Sabres center Tyler Ennis the last six games, said a spokesman for his Swiss club, the SCL Tigers. Ennis is expected to return this week. He has zero points in two games.