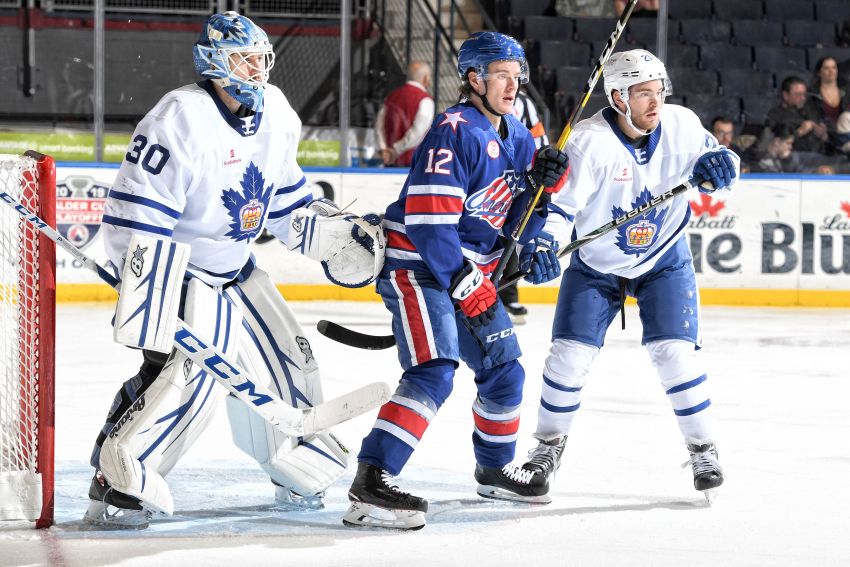 ROCHESTER – Chris Taylor was seething following Sunday afternoon’s 3-2 overtime loss. Can you blame the Americans coach? Through 122 minutes of hockey, his team has thoroughly outplayed the Toronto Marlies.

But the Amerks have nothing to show for it. Just like that, they’re on the brink, down 2-0 in the best-of-five series AHL North Division semifinal playoff series.

The Marlies can eliminate them Wednesday in Toronto.

“I’m upset, I’m mad,” Taylor said after the Amerks blew a 2-0 third-period lead in just 55 seconds inside Blue Cross Arena. “I know the guys are upset and mad. We need results.”

The Marlies earned their positive result because winger Jeremy Bracco scored his second goal of the afternoon 2:20 into the extra session.

Incredibly, the Amerks haven’t won a playoff game since April 26, 2014 against the Chicago Wolves.

Few expected the Amerks, one of the AHL’s deepest and most talented clubs, would fritter away both home games. They enjoyed a 99-point regular season. Their offense ranked among the league’s most potent.

“We got to execute,” Taylor said. “I don’t know what to say. We’ve done it all year executing and scoring those big goals, and right now, we’re having a hard time with it, like a really hard time with it.”

On Sunday, they pumped 42 shots on goal, including 18 in the first, yet they couldn’t score in the period. Thirty-goal scorer Victor Olofsson has already hit three posts in the series.

“Kind of a bend-don’t-break method for us,” Bracco said. “(Kaskisuo) was huge in both games here for us, stood on his head and made huge saves. We got some puck luck in some ways and we were able to capitalize on opportunities.”

In Friday’s 4-1 loss, the Amerks registered 15 of their 30 shots in the opening 20 minutes and also hit four posts or crossbars in the contest. Their only goal came late in regulation.

“You look at all the scoring chances, all the shots we’ve had, it’s the execution of it,” Taylor said. “They get one chance, it’s in the back of our net.

“If we want to be a team that goes anywhere – win one game – we got to put pucks in the net.”

He added: “We got to be wanting to score goals so bad you’re putting your body into the net after the puck goes into the net. That’s what it’s going to take.”

The Amerks started breaking through during the second period, getting goals from forwards C.J. Smith and Kevin Porter.

Then the genesis of the Marlies’ comeback started 51 seconds into the third period, when Porter, the Amerks’ captain, took a slashing penalty.

“I didn’t come close to his hands,” Porter said. “I thought it was a good play. I was really surprised they called a penalty.”

West Seneca’s Chris Mueller scored on the ensuing power play eight seconds later. Bracco the tied it at 1:54 before the Easter Sunday crowd of 4,092.

“You can see we’re not giving up a lot,” Taylor said. “When we do give something up, it’s in the back of our net.”

Amerks winger Wayne Simpson said: “It was like they got two opportunities and both ended up in the back of the net. They made plays and got hungrier around the net.”

Then Bracco’s backhander from the bottom of the left circle past a sprawling Scott Wedgewood won it.

“They’re frustrated big time,” Taylor said of his players. “Even just before the (overtime) goal, we had a chance to take the puck to the net and we tried to be a little too fancy. All of a sudden, we had to change the line and get back and it’s in the back of our net.

“We got to be harder on (Bracco),” Taylor said. “It’s way too easy. Look at the points he’s getting against us.”