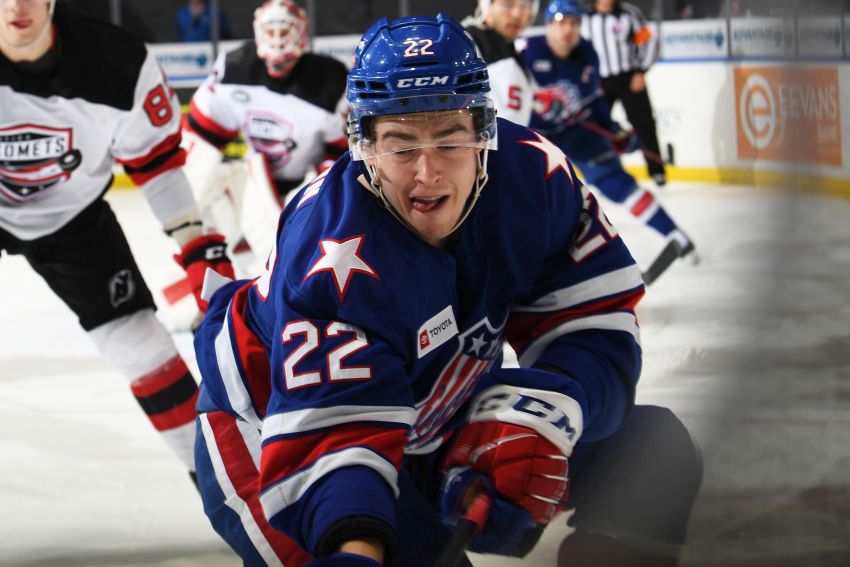 By the end of the Rochester Americans’ thrilling 10-game playoff run, winger Jack Quinn recaptured some of the slick form that made him a dynamic scorer during the regular season.

Three times in the final two games, including once in overtime of Wednesday’s season-ending, 6-5 loss to the Laval Rocket, Quinn, 20, had Cayden Primeau beaten but the puck hit the knob of the goalie’s stick or the post. On Monday, Quinn pumped a career-high eight shots on goal.

“If we had extended the series, pucks were gonna start going in the net for him, it was just a matter of time,” Amerks general manager Jason Karmanos said on a Zoom call Friday.

Remember, Quinn registered 26 goals and 61 points in just 45 regular-season games, gaudy numbers that earned him AHL top rookie honors. He never went more than two outings without recording a point prior to the postseason.

“My game went through some struggles over the last month,” Quinn said on a Zoom call Thursday as the Amerks held end-of-season meetings. “I kind of wasn’t playing to the level I expected myself to be. But the last few games I thought I really found it and was kind of back to my expectations. Even though it didn’t translate to the score sheet, I thought I was back to where I wanted to be.”

Quinn and the organization’s brass feel encouraged by how he adapted and evolved during his first taste of playoff hockey, finding ways to the contribute as opponents targeted him.

For example, Amerks coach Seth Appert said the 6-foot, 185-pound Quinn responded to the rigors of the postseason and showcased a more physical style.

“He helped us beat the best team in the American Hockey League (the Utica Comets) without scoring a goal,” Appert said on a Zoom call Friday. “And so that’s hard to do at 20 years old, to have that … commitment to winning even when things aren’t going well for yourself.

“I think that’s a rare trait that is incredibly important in a hockey player – how hard he played, how much he finished checks and backchecked and did things to create momentum for us in spite of not scoring as much.”

It’s very possible Quinn, the eighth overall pick in 2020, has played his last game for the Amerks and will graduate to Buffalo, where he earned his first two NHL games this season.

After making his first 15 pro appearances for the Amerks in 2020-21, Quinn enjoyed a productive summer, and he showed up at training camp a stronger skater who possessed a heavier shot.

“He took the struggles last year and he used it to fuel an incredible summer, incredible summer where he worked on his skating, his shot and his strength, and he came back and dominated the American Hockey League,” Appert said.

He added: “He probably made a 10 percent increase in his skating power and efficiency from last year to this year.”

With a full season of experience and another summer at his disposal, how much might Quinn improve his game?

Appert, who often lauds Quinn’s intelligence and maturity, believes the youngster will use the adversity and struggles he endured during the postseason “to go fuel an incredible summer again.”

“When you don’t feel like going in the weight room in the middle of July and you’re tired and you just don’t want to go shoot 500 pucks that day, those are things you remind yourself of that you don’t want to have that feeling again, that you’re a little (ticked) off about the way it ended,” Appert said. “And that’s how you use that adversity to fuel the growth in your game. And I know he’s gonna be a possessed young man this summer.”

Quinn said: “The playoffs I wasn’t where I wanted to be in terms of where I was in the regular season. I wasn’t able to match that, so it’s definitely motivating for me.”