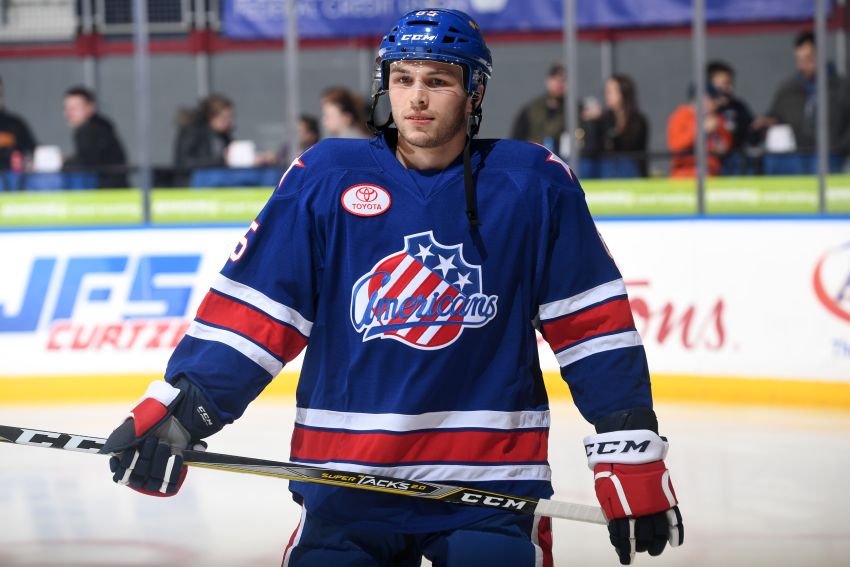 The two meshed well together, but around Christmas that rollicking 2014-15 campaign, an underrated senior began playing right wing with O’Regan and Eichel.

“Evan came onto that line and (we) just absolutely took off,” O’Regan said Wednesday following his debut with the AHL Americans, a 2-1 overtime loss inside Blue Cross Arena.

Evan is Evan Rodrigues, the speedy forward the Buffalo Sabres signed as a free agent out of BU that spring.

O’Regan, Eichel and Rodrigues quickly morphed into perhaps the NCAA’s most lethal line, piling up points as the Terriers roared to the national title game.

“We still talk about it all the time,” O’Regan said. “We were obviously one win away. But just the amount of fun we had winning games like that, the season, I’ll never forget.”

If O’Regan impresses the Sabres enough, the slick trio could be reunited someday in Buffalo. The Sabres acquired O’Regan, 24, Monday in the trade that sent winger Evander Kane to the San Jose Sharks.

While O’Regan was happy in San Jose, he’s already comfortable in the Sabres organization, where familiarity surrounds him.

“I loved it in San Jose, but I was really excited to come here,” he said.

He added: “Everything considered, it’s a really good spot for me.”

O’Regan is still close with Eichel and Rodrigues. He lived with Eichel last summer in Massachusetts. O’Regan also roomed with Amerks forward Colin Blackwell last season when they were rookies with the San Jose Barracuda, the Sharks’ AHL affiliate.

One of the Sabres’ assistant general managers, Steve Greeley, was an assistant coach when O’Regan played at BU.

O’Regan wasn’t expecting to leave San Jose, which drafted him in the fifth round, 138th overall, in 2012. He scored 23 goals and 58 points in 63 AHL games last season, winning top rookie honors. He has also played 22 NHL contests over the two years, including nine last month, compiling one goal and five points.

But shortly before Monday’s trade deadline, O’Regan was called off the ice while practicing with the Barracuda.

“I had no idea it was coming, I was caught off guard a little bit,” said O’Regan, who will be a restricted free agent following the season. “I know it’s always a possibility, that people get traded all the time. I never ruled it out.”

The 5-foot-10, 185-pound O’Regan offers the Sabres an intriguing prospect.

“I’m going to be a guy that creates offense,” he said. “I try to be good down low, good in traffic, come out and make plays, making guys around me better, try to be good in all three zones. But offense is really on my mind a lot, too.”

Despite flying across the country and only having a short morning skate with his new teammates, Amerks coach Chris Taylor ran O’Regan ragged Wednesday against the Bridgeport Sound Tigers, playing him in every situation.

Taylor said he wanted to see what the newcomer could do and noticed he wore down late. O’Regan was on the ice for the overtime winner.

“He was great, he showed a lot of patience with the puck, he’s gritty down low, really like his cutbacks around the net, his vision’s really good,” Taylor said.

As you would expect, Rodrigues raved about O’Regan’s talents.

“He has a knack for finding open areas on the ice and he has a knack for the net,” Rodrigues said Tuesday. “He always seems to be poking around and finding soft spots, and when he gets open looks he’s able to put the puck in the net.”

An infusion of O’Regan’s offense for the stretch run – the Amerks have lost 10 of their last 12 games – should help the struggling team.

“Just making quick decisions and making the right play, it takes a couple games to get that back,” Guhle said.

Guhle played his first two games with the Sabres this season shortly before he was hurt.

“I think I showed them I could play at that level,” he said. “That’s my goal.”