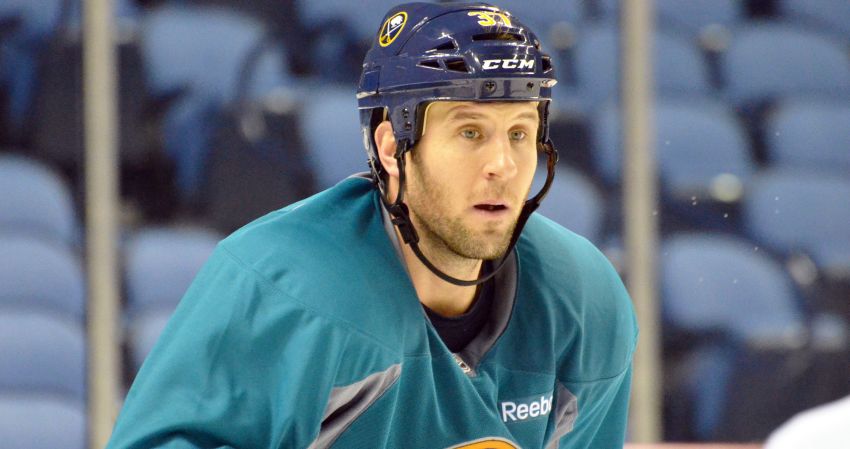 BUFFALO – Reminders of the Sabres’ recent roster overhaul are all over Matt Ellis’ Clarence neighborhood.

Each day, the hardworking forward drives by “For Sale” signs in front of the homes Jordan Leopold and Jason Pominville recently left. When Ellis picks up neighbor Cody McCormick, instead of going downtown, the teammates drive 75 miles down the thruway to Rochester, their new playing home.

“The only one left in our neighborhood is (Thomas Vanek),” Ellis, the Rochester Americans’ new captain, said by phone Wednesday. “So the changes are crazy.”

The likable Ellis was the first to go.

The 31-year-old, the Sabres’ 12th or 13th forward much of his five-year tenure, had spent the last two years wondering if he would get sent back to the AHL.

Then, on Feb. 10, he arrived at the First Niagara Center for a morning skate.

“I came to the rink not thinking I had anything to worry about on a Sunday,” Ellis said.

But he quickly found out the Sabres needed a roster spot with defenseman Robyn Regehr possibly returning from his injury.

“I read the situation right away,” Ellis said. “I’m not a young kid.”

When Ellis found out Regehr was playing, he approached the staff.

Ellis was on waivers before he left the building. The Sabres assigned him to Rochester the next day, his first AHL stint since 2010-11. McCormick, a Sabres regular more than two seasons, joined the Amerks a week later after clearing waivers.

Two seasons ago, fresh off his first full NHL campaign, Ellis had trouble acclimating himself to his AHL stint in Portland.

Ellis was living away from his family. It took him “a little while to fully engage.” He couldn’t let go of what was happening with the Sabres.

“I found myself to be kind of hanging off of what’s going on in Buffalo, who’s hurt, when are they playing, what’s the schedule?” Ellis said. “That kind of consumed a lot of my day.”

Ellis is treating this trip to the minors differently, however. He’s still living at home. He requested Amerks apparel his first day in the dressing room, something he hoped would engage him immediately.

“I’m not going to waste any time,” Ellis thought to himself. “I’m here. I want to play. I’m hungry to play. I just sat through the lockout.”

Still, going back to the minors after 267 NHL games isn’t easy.

“Obviously, at first it’s a shock to the system going from the Sabres back down to Rochester,” Ellis said. “When everything happens, it becomes a big wall of emotion and you’re trying to make sense of things.”

“The No. 1 thing that he brings is leadership by example,” Cassidy said. “He’s not a guy who’s overly talkative, but he shows the young guys every day exactly what it is to be a professional just in terms of his preparation and work. He comes out, he’s the hardest-working guy in practice every day.”

Ellis’ game changes in the AHL, where he’s a legit scorer. More playing time has “rejuvenated a little bit of that fire for me,” he said.

“Going from a five-, six-, seven-minute a night player in the NHL … to a guy that now’s playing 20-plus minutes some nights in some situations, part of it’s been nice,” Ellis said.

But does Ellis have a future with the Sabres?

“I think so,” he said. “In what capacity I don’t know. I would think from a development standpoint, I’d be a guy that they’d (like) to groom their investments, their prospects and their good players coming up. In terms of future in Buffalo itself, I don’t know. With so much going on, so much up in the air this year, I don’t think anyone knows what the situation is.

“The five years that I’ve been here I’ve always had a great relationship with the staff and management. I’m thankful for the opportunity that they’ve given. It’s been great to be a part of it.”

The Sabres made one lineup change for Thursday’s 5-1 loss to the Montreal Canadiens inside the First Niagara Center, sitting tough guy John Scott and inserting winger Luke Adam. Scott had been taking a regular shift for the first time this season.