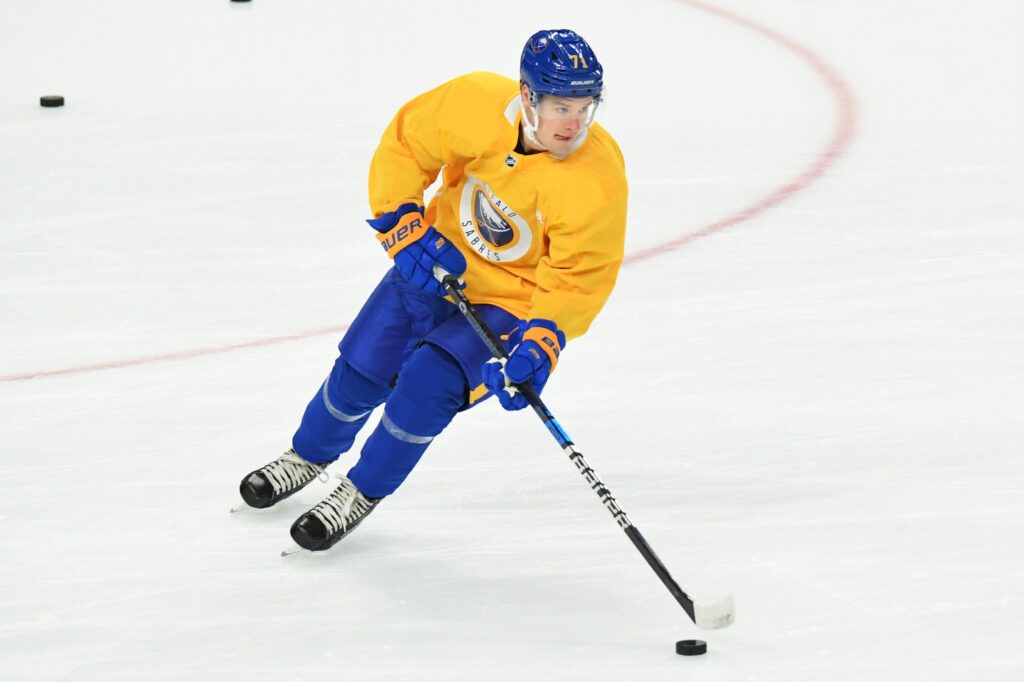 ROCHESTER – Brandon Biro doesn’t grab your attention like other Sabres prospects. In fact, it might take a little time to appreciate the undrafted center’s talents.

“I’m not like a flashy player or anything,” Biro told the Times Herald on Jan. 29 after scoring a goal in the Americans’ 4-2 loss to the Utica Comets at Blue Cross Arena.

The recent exploits of Peyton Krebs, JJ Peterka and Jack Quinn can fill up a sizzle reel of highlights. So on an Amerks team that has featured those dynamic rookie forwards and some other highly touted prospects this season, Biro, 23, has been overshadowed.

“When you watch him one or two times, he probably doesn’t scream NHL,” Amerks coach Seth Appert said last month. “He’s not 6-2, 210 pounds. He’s a player coaching every day you appreciate how good he is.”

How good is the 5-foot-11, 165-pound Biro? Well, the Penn State product might be knocking on the NHL’s door.

Having recorded 29 points in 33 games this season, Biro ranks ninth in scoring among AHL rookies. Quinn (35 points in 24 contests) and Peterka (34 points in 34 outings) rank third and fifth, respectively.

“If he was in a lot of other organizations, they would be talking about him,” Appert said.

With Krebs, Peterka and Quinn all having been recalled to Buffalo and also missing time to injury or illness, Biro has quietly seized his opportunity, developing into one of the Amerks’ top forwards.

Biro compiled two goals and eight points over a six-game point streak before going pointless in Saturday’s 5-2 loss to the Toronto Marlies. Since Dec. 15, he has recorded six goals and 22 points in 18 contests.

“To get a little taste of it is motivating, kind of gives you some confidence,” Biro said of the NHL.

If Biro, a free agent the Sabres’ old regime signed in 2020, keeps up his torrid production, he could certainly earn his first recall to Buffalo’s active roster.

Injuries have stymied Biro, a natural winger who has been playing center, a bit during his short pro career. Last season, he was hurt during training camp and later in the AHL. Still, the 15 games he played for Rochester allowed him to become familiar with the coaching staff and his new teammates.

This season, Biro was also injured in NHL camp. After the Sabres assigned him to the AHL, he played a bottom-six role in a deep forward corps.

So Biro established himself as an energy player – “My game is kind of playing a tenacious game,” he said – and penalty killer.

“Kind of the role I needed to be in was just be tenacious on the forecheck, kind of create turnovers for teammates,” Biro said.

As Biro solidified that role, his confidence ballooned.

“He started playing so darn hard that he was just around the puck a lot because he was in the hard areas so much,” Appert said.

After the Sabres summoned some forwards, Biro began displaying his offensive side. By then, Appert said Biro possessed the puck so often he felt comfortable with it.

“Right now, I think he’s at his best place that he’s been in his time with us in terms of having a bit of both; having the tenacious forechecking and puck hunting style that he’s going to need to have to be an NHL player mixed with having a lot of poise and confidence with the puck on his stick,” Appert said.

That versatile style will only increase Biro’s chances of cracking the NHL someday. If he makes it to Buffalo, he will likely have to play a third- or fourth-line role.

“He’s really grown, he’s really bought into being hard to play against, being tenacious, being a great penalty killer,” Appert said. “He can play center, he can play left and right wing. He’s got enough skill to play up your lineup, but he’s good enough defensively and hard enough to be in your bottom six. I think that versatility and growth in his game is going to put him in competition to play in the National Hockey League.”

Notes: The Sabres are scheduled to practice for the first time following the NHL All-Star break at 2 p.m. today. … Teams can no longer utilize taxi squads, which were implemented around Christmastime when dozens of players started entering COVID-19 protocol. … Sabres prospect Devon Levi, who left Northeastern to join Team Canada’s Olympic entry, served as the third goalie for Monday’s scrimmage against Team USA, according to The Canadian Press.