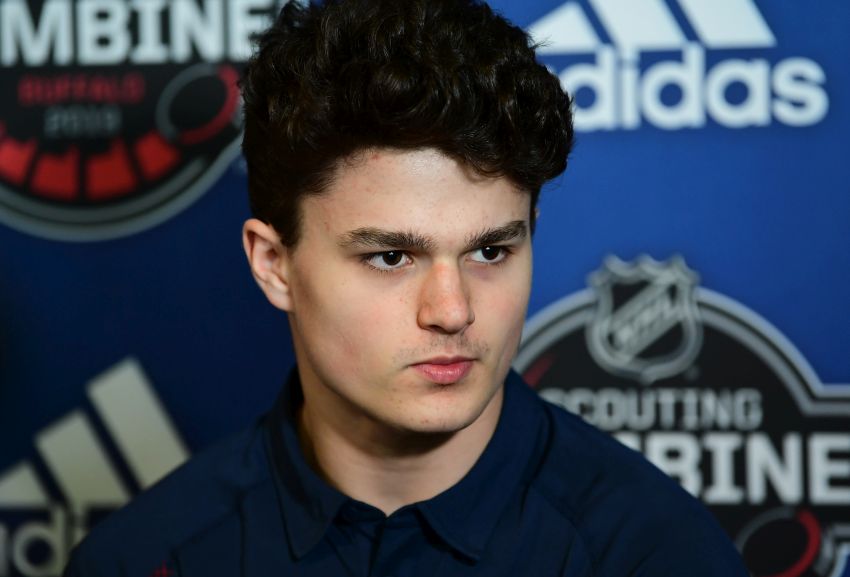 Alex Turcotte might not last until the seventh pick. ©2019, Hickling Images

Instead of jumping to elite teams stocked with top talents, Alfie made Alex, a slick center projected to be an early selection at the NHL Draft, stay put on local clubs around Chicago. His reasoning was simple.

“I cared about my kid playing hard every game,” said Alfie Turcotte, a former center who played 112 NHL games over parts of six seasons. “So if you’re on (the) best team, you can take games off and you’re still going to win.”

Being a star on a “regular” squad forced Alex, who joined the U.S. National Team Development Program in 2017, to give a max effort every outing.

“It helped me show up and compete every game,” Alex, 18, said Friday inside Harborcenter, where the NHL Scouting Combine has been going on this week. “I guess not being on the best team sometimes I had to … be at my best at all times, didn’t really have anyone holding my hand. I think it taught me how to be competitive and be consistent.”

Of course, Alex, who has committed to play college hockey at Wisconsin, didn’t always like his father’s plan. He said some years he wanted to play for better teams. Still, he trusted everything would pay off.

“He’s been through it and he knows what to expect and how to get through it,” Alex said of his father’s career. “He’s taught me a lot off the ice.”

Alfie, who turns 54 on Sunday, played 15 pro seasons after the Montreal Canadiens drafted him 17th overall in 1983. He shuttled between the NHL and the minors – he compiled 102 points with three AHL teams in 1987-88 – before going overseas.

“I kicked around in the minors,” Alfie said. “I was just a … pro hockey player making a living. Yeah, I don’t want that for him. Alex has the talent and the drive and, more importantly, the discipline to play in the NHL for 15 years.”

Two years ago, Alfie let his son join the USNTDP, an elite program for the country’s top hockey prospects. Alex’s array of talents have blossomed playing on some loaded squads. NHL Central Scouting rated him the No. 4 prospect among North American skaters.

The Sabres, who need another center to complement Jack Eichel, would probably love to snare Turcotte if he lasts until the seventh pick June 21 in Vancouver, which seems unlikely.

“To truly appreciate Alex, I think you really do need to see him every day,” said John Wroblewski, Turcotte’s coach with the USNTDP under-18 team. “His statistics do jump off the page, but I think you don’t even understand how competitive and how versatile he is until you watch him. …

“He just rises up and becomes noticeable in every single facet.”

That versatility, Wroblewski said, leaves defenders guessing what the 5-foot-11, 185-pound Turcotte might do.

“If you try to take away one thing, you try to play him one way, he’s ready to go the other way,” Wroblewski said.

The most impressive part of Turcotte’s 2018-19 campaign might’ve been his dynamic play against some NCAA teams after returning from an early-season injury.

On Dec. 15 at Michigan State – the USNTDP plays college teams and a junior schedule – Wroblewski said Turcotte “was the most dominant player on the ice the first game back.”

“We were considering limiting his minutes in that game and making sure he was back and ready to go,” Wroblewski said. “Sure enough, it’s vintage Alex right away.”

But it took Turcotte time to score. Finally, he registered his first goal in dramatic fashion Dec. 27 against St. Cloud State.

“He’s ready to lose it on somebody, himself included, (but he’s) still playing awesome,” Wroblewski said. “But he goes out and gets the game winner against the No. 1 team in the country with 45 seconds left. So that’s just the kind of class the kid has and one that’s very difficult to match, his versatility.

“I can’t express enough how he can burn you in different fashions. He’s just so dynamic in every way. … He’s fearless yet patient, really the type of player that fans are going to fall in love with.”