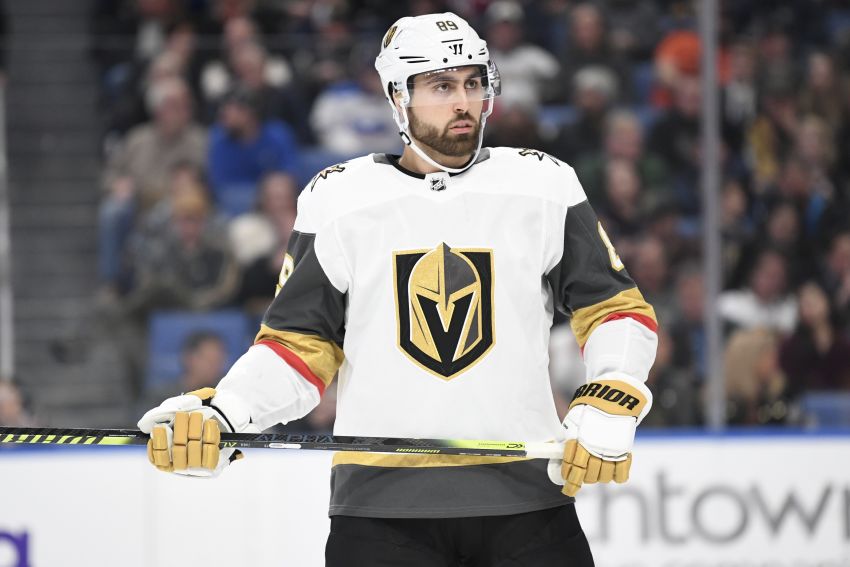 BUFFALO – What makes winger Alex Tuch’s passion for the Sabres so unique is that he possessed it long before the team acquired him Nov. 4.

Tuch, 25, grew up in Baldwinsville, about 150 miles from KeyBank Center, rooting for his beloved Sabres. He attended games, owned jerseys and reveled in their success.

So from the get-go, Tuch, who’s scheduled to make his Sabres debut tonight, fit right in. He feels the same excitement as defenseman Rasmus Dahlin, centers Casey Mittelstadt and Tage Thompson, and other members of the Sabres’ young core.

“They want to be a Buffalo Sabre,” Sabres coach Don Granato said following Sunday’s practice. “They want to make this community proud of being Sabres fans. Tuch jumped right in on that. I mean, he is that. He was the fan, he was the kid in the stands watching Sabre hockey, aspiring to play for the Sabres.”

Tonight’s game, assuming it can be played – the Columbus Blue Jackets have three players in the NHL’s COVID-19 protocol – will be extra special for Tuch. Not only will he be fulfilling a lifelong dream by playing for the Sabres, it will also be his first game since undergoing offseason shoulder surgery.

“He’s as excited as anybody I’ve seen to play a game, because it’s here, because he’s putting that jersey on,” Granato said. “Anybody that’s grown up in the game of hockey that loves it like we all do, because we’re in the business, when you see that you feel that and that’s a pretty awesome feeling.”

The date Tuch had surgery, July 21, is seared in his mind.

Tuch, one of three assets the Sabres received from the Vegas Golden Knights in exchange for Jack Eichel, said acclimating to his new team has “been pretty crazy.”

The Boston College product acknowledged trying to mesh with his new teammates while recovering from an injury has been difficult. Still, he said everyone as been welcoming.

He started practicing Nov. 29 and has also been participating in meetings and traveling with the team. He began full-contact practices last week.

“It’s been pretty weird that I haven’t been able to play,” said Tuch, who hasn’t played a game since June 24, the end of Vegas’ playoff run. “That’s probably the biggest difference from coming to a new team. Usually you deal with a little bit of media and a lot of the playing; right now, I’m dealing with not playing and a little bit of media still.

“My teammates have made it really easy on me. The coaching staff and everyone’s been supportive and really excited to have me, and I truly felt that right from the start.”

Granato said Tuch, who has been traded twice since 2017, understands the business side of hockey and the demand and responsibility that accompanies it.

“But there’s a big kid inside him because it’s here in Buffalo,” Granato said. “For me as a coach, you sense and feel that and that’s what I want out of our players. We’ve talked plenty about passion and energy and you have to be able to identify with the kid in yourself, the dreams you had. You’re living the dream, all these guys are, and that’s OK. We want that to be part of their game and never to forget that.

“So we have that passion that they play with and obviously then to be able to identify the business side of it. This is a business. He’s at a great point in his career for us as a team and as a coach to have that combination. And we’re not even talking about his skill, which is obviously extremely high.”

The 6-foot-4, 217-pound Tuch practiced at right wing Sunday beside center Dylan Cozens and Brett Murray on what could be considered the Sabres’ top line. Tuch gives the rebuilding team an established scorer who has compiled 61 goals in 255 career games, including 18 in 55 contests last season.

“He’s got a lot of tools,” said Sabres goalie Malcolm Subban, who played with Tuch in Vegas. “He’s scored big goals in the past and I’m sure he’s going to score a lot more. I think just overall as a player and as a person, he’s one of the nicest guys you’ll meet. Just genuine, outgoing. He’s a great guy and they’re gonna love him here.”