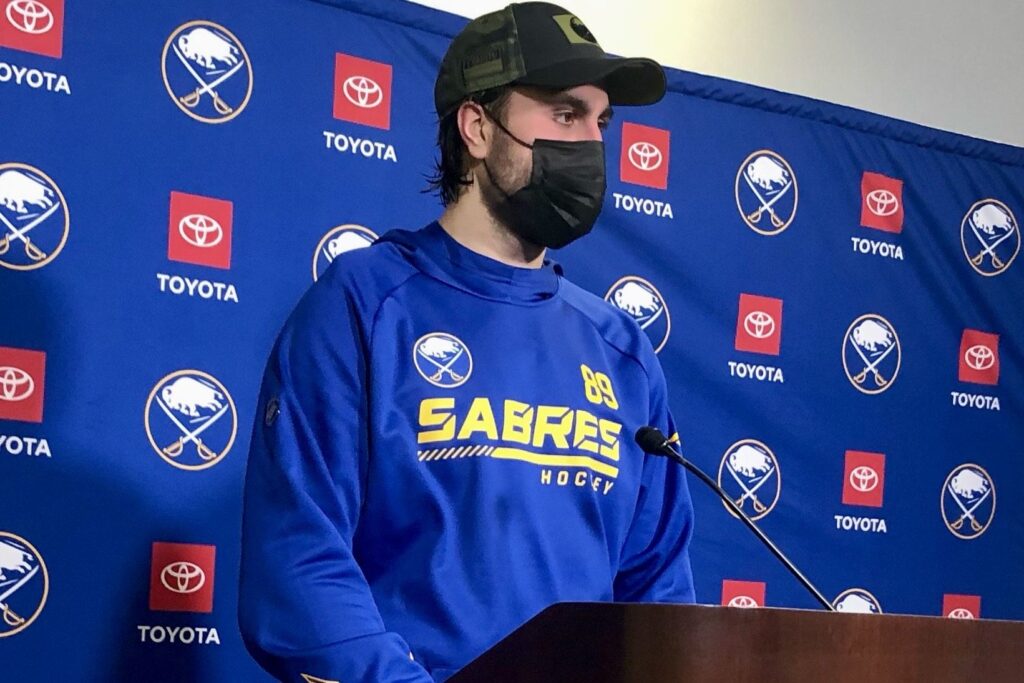 Alex Tuch talks to the media this morning. ©2022

BUFFALO – While he quarantined in his apartment, Sabres winger Alex Tuch received a few items from the rink, including some workout bands, so he could exercise a bit.

But Tuch, who said he felt symptom-free after testing positive for COVID-19 last Tuesday, did not do much formal exercising. Instead, he tried to eat healthy, sleep well and stay active around his place.

“If that meant cleaning the apartment two to three times a day, that’s what I had to do just to get up on my feet and move around,” Tuch said this morning. “My dog Teddy there kept me active, too. I was playing with him a lot, so I have to thank Teddy for that.”

In addition to Tuch, winger Kyle Okposo, the Sabres’ third-leading scorer, left the NHL’s COVID-19 protocol and participated in this morning’s optional skate. They won’t play tonight against the Tampa Bay Lightning at KeyBank Center.

Sabres coach Don Granato hope they can return for Thursday’s road game against the Nashville Predators.

“Very exciting to get guys back in,” Granato said. “These are guys that have felt well for days now and they’re just waiting to be cleared. They’re excited.”

Tuch, 25, had just played his first three games for the Sabres after recovering from offseason shoulder surgery.

“Frustration is a good word for it,” Tuch said of leaving the lineup so soon.

Tuch said he sits next to Okposo in the dressing room. After Okposo entered protocol Jan. 3, he knew he might test positive.

“A lot of people are going through it in the world today,” Tuch said. “I went almost a full two years without. I had no symptoms. It wasn’t that bad. It was just quarantining and sitting isolated was probably the hardest part about it. You know what, I feel OK coming out of it. I had a good skate this morning and I just want to get back to work.”

Granato said no one else entered protocol today. The Sabres this morning recalled winger Brett Murray, who has played 15 straight games for them, from the Rochester Americans following a four-day stint in the AHL.

Tuch said he met Quinn, 20, in person for the first time this morning.

“I’ve heard nothing but unbelievable things and he looked really good out there so far,” Tuch said. “All I can say to him is just go out there and have fun. … He’s definitely champing at the bit to get out there. It’s exciting to watch his excitement, honestly. I think he’s going to have a really good career and it starts with game one.”

The Sabres technically reassigned Murray and Quinn to the taxi squad. They must be elevated to the active roster later today.