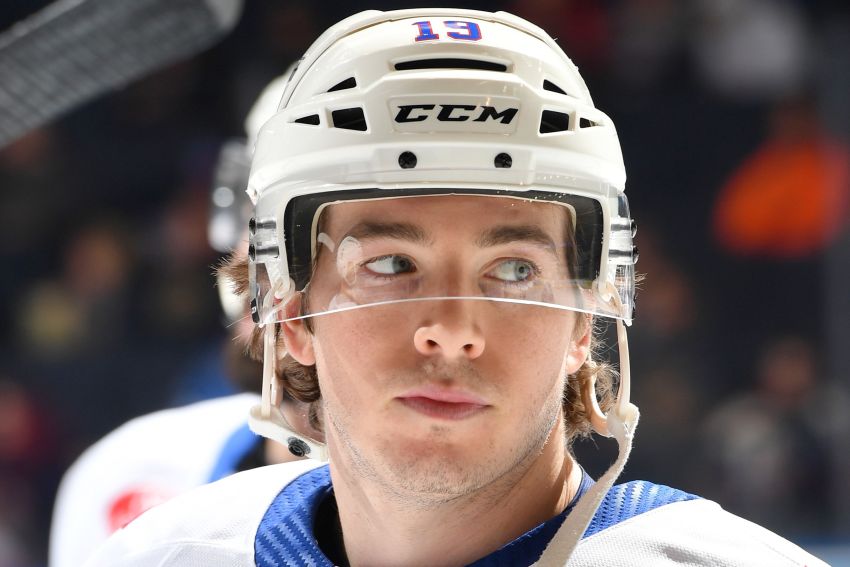 BUFFALO – Only about 10 Sabres forwards have roster spots locked up, meaning in a training camp filled with competition, the best battles might be taking place up front.

Among the players fighting for the four or so remaining slots are journeymen (Jean-Sebastien Dea, for example), NHL veterans (Vladimir Sobotka) and prized prospects (Victor Olofsson).

Then there’s C.J. Smith, an older (he turns 25 on Dec. 1) and often overlooked prospect who has quietly ranked among the AHL’s top scorers for two seasons.

After earning a spot in the AHL All-Star Game as a rookie, Smith kept developing last season, scoring 28 goals and 58 points in 62 contests.

Smith was so dynamic the Sabres recalled him in late December because they needed a spark.

“The more experience I get, the more I learn from it,” Smith said Friday. “I’m really good at learning the game and learning to play at high levels. … I’ve always had to think the game, just being a smaller guy.”

Now Smith’s AHL apprenticeship could be over. With so many open spots and a new coaching staff running camp, he has a splendid opportunity to crack the NHL lineup.

“I like where it’s at,” Smith said of his opportunity. “It’s also really deep, too. I think there’s a lot of guys here that can play in this league and play at the level. So it is really competitive.”

That competition will kick up a notch tonight, when the Sabres open the preseason against the Pittsburgh Penguins at Pegula Ice Arena on the Penn State campus.

Following four days of practice inside KeyBank Center, the Sabres are probably itching for some game action.

The Sabres play four of their six preseason games this week, including a road contest Tuesday against the Columbus Blue Jackets. Smith will likely play then.

Expect the Sabres to give Smith, who played 11 NHL games last season, a long look this preseason.

On Sunday, Smith practiced at left wing on a scoring line beside center Casey Mittelstadt and Sam Reinhart, an intriguing trio.

Besides talent, Smith has something else going for him. He must clear waivers if the Sabres want to send him to Rochester this season, according to capfriendly.com. Given his age and track record of scoring, he would likely be claimed.

“He’s left his mark here in the first three days,” said Krueger, who doesn’t want to assess his players yet.

“He’s willing to listen, he wants to learn a lot,” said Smith, a free agent the Sabres signed from UMass Lowell. “He’s a very honest guy, which at this level is very important.”

He added: “I really like his philosophies, just his personality and his charisma. I think he just brings a good energy to the locker room. I think he’s just one of the guys (who) walks into a room and you kind of respect him. He brings a really good message.”

One of Krueger’s messages is to play fast. When Smith heard that, he altered his offseason workouts, taking out a day of heavy lifting and add more running.

“He wanted to bring a really-fast paced game, and they said, ‘Get in shape,’” Smith said. “So I did a lot of sprinting, a lot of running and I think I just kind of had a jump in my step the last two days. I feel really good.”

Olofsson, who wore No. 41 during his six-game stint with the Sabres last last season, has switched to No. 68.

The Swede said he likes the look of 68, the year his father was born.

“I always played in No. 11 before I got over here,” he said. “Obviously, that’s not going to happen here.”

No. 11, of course, belonged to the legendary Gilbert Perreault and was the first number the Sabres retired.

Notes: Krueger said he plans to play four goalies over the first two preseason games. … Krueger said assistant coaches Don Granato and Steve Smith will be on the bench with him during games, while Mike Bales and Myles Fee will be in the press box. … The Penguins will field a lineup mostly comprised of AHL players. None of their stars are scheduled to dress.

One thought on “AHL star C.J. Smith intent on sticking with Sabres this season”