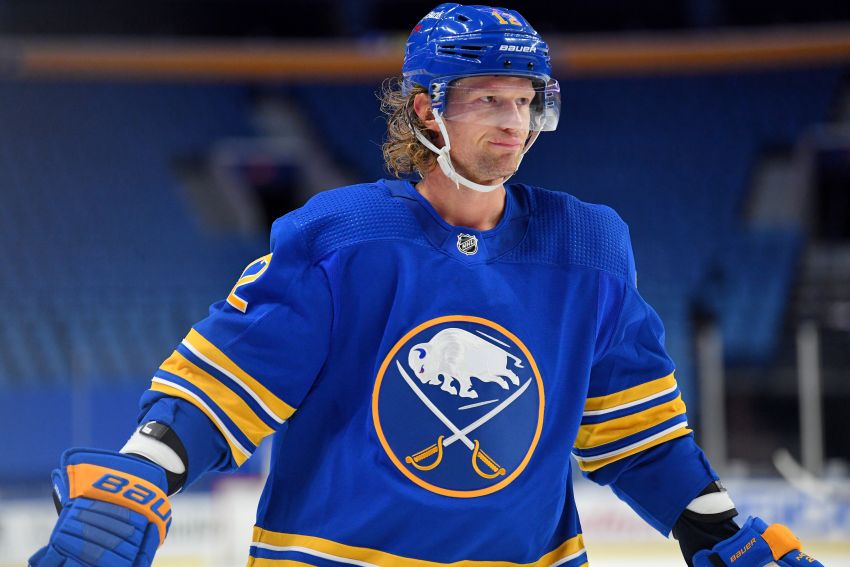 Winger Kyle Okposo knows center Eric Staal was likely only the first of several veteran teammates who will be leaving the hapless Buffalo Sabres over the next few weeks.

The Sabres, having lost 16 straight entering this afternoon’s road game against the Boston Bruins, are broken and on pace to be historically bad. The NHL’s laughingstock needs a massive overhaul, so anyone could be in play before the April 12 trade deadline.

“I mean, nobody’s naive here,” Okposo said on a Zoom call Friday shortly before the Sabres traded Staal to the Montreal Canadiens. “Everybody knows what’s going on with the situation that we’re in and we know that there’s going to be changes coming. Still doesn’t make it any easier.”

When word spread before Friday’s practice Staal would be dealt, Okposo said he left the TD Garden ice in Boston to wish his friend well.

“He’s a character guy,” Okposo said. “He’s a really good person, he’s a good man. He’s had a heck of a career to date and he’s going to continue to play well. So I wish him nothing but the best.”

The Canadiens gave the Sabres third- and fifth-round picks for Staal, 36, a decorated veteran who has struggled nearly all season. The Sabres will retain $1.625 million of his $3 million salary. Staal can become an unrestricted free agent following the season.

Staal approved the deal because Montreal was on his 10-team no-trade list, according to The Athletic’s Pierre LeBrun.

Right now, anyone entering Canada from the United States must serve a 14-day quarantine because of the COVID-19 pandemic. The Canadian government, however, is reportedly set to shorten that to seven days for athletes.

The Canadiens’ activities are paused until at least Tuesday because of COVID-19, so Staal could only miss minimal time.

Staal’s arrival from the Minnesota Wild on Sept. 16 in exchange for forward Marcus Johansson generated much-needed excitement within the Sabres’ disgruntled fan base.

In Staal, rookie general manager Kevyn Adams acquired one of the NHL’s most decorated and respected players and found a No. 2 center the team sorely needed to play behind captain Jack Eichel.

Adams’ first significant move helped him establish credibility. Staal won the Stanley Cup as Adams’ teammate with the Carolina Hurricanes in 2006 and an Olympic gold medal with Team Canada in 2010.

In his first 16 NHL seasons, Staal amassed more than 400 goals and 1,000 points. He also showcased remarkable longevity, consistently scoring 20 or more goals into his mid-30s.

But Staal has endured a tough season, compiling just three goals, 10 points and an awful minus-20 rating in 32 outings. He has a 23-game goal drought, having last scored Jan. 30.

His wife and children also stayed home in Minnesota this season.

“It’s been challenging,” Staal said last week of his season. “It hasn’t been good enough. I haven’t been good enough. Clearly, in my mind, I had envisioned things differently coming here and it just hasn’t come to fruition and it hasn’t lived up to those thoughts. I think that’s for sure been challenging, that’s been difficult, but that’s still no excuse. It doesn’t matter.”

Shortly before the trade was completed, Sabres defenseman Brandon Montour said playing with Staal had “been unbelievable.”

“You can see his passion,” Montour said Friday. “Obviously, he’s experienced everything he can as a player and all the success he’s had, but even in these down times here he always came in with a positive mindset, was always a great guy, I think, to even just the young guys onward.

“Having him around the locker room and seeing his face just around the hotel, practices, games, it’s great to have him here, for sure.”

In a statement, Adams said Staal’s professionalism “was felt by everybody in our organization from top to bottom.”

“I know his leadership and demeanor were valued by our players, coaches and staff, and Eric’s impact on our young players is obvious,” he said. “It was a pleasure to be around Eric again and I wish him and his family all the best.”

Hall, 29, and Montour, 26, figure to draw the most interest. Hall, the 2017-18 NHL MVP, has compiled just two goals, 17 points and a wretched minus-17 rating in 32 games this season. Still, if the Sabres are willing to absorb some of the money on his one-year, $8 million contract, he could fetch a strong asset.

Hall, who has a no-movement clause, said following Thursday’s 4-0 loss to the Pittsburgh Penguins he would listen if Adams told him another team was interested in him.

Montour, a puck-moving defenseman, hasn’t showcased much growth since the Sabres acquired him two years ago. The Sabres traded a first-round pick and defense prospect Brendan Guhle to the Anaheim Ducks in exchange for Montour.