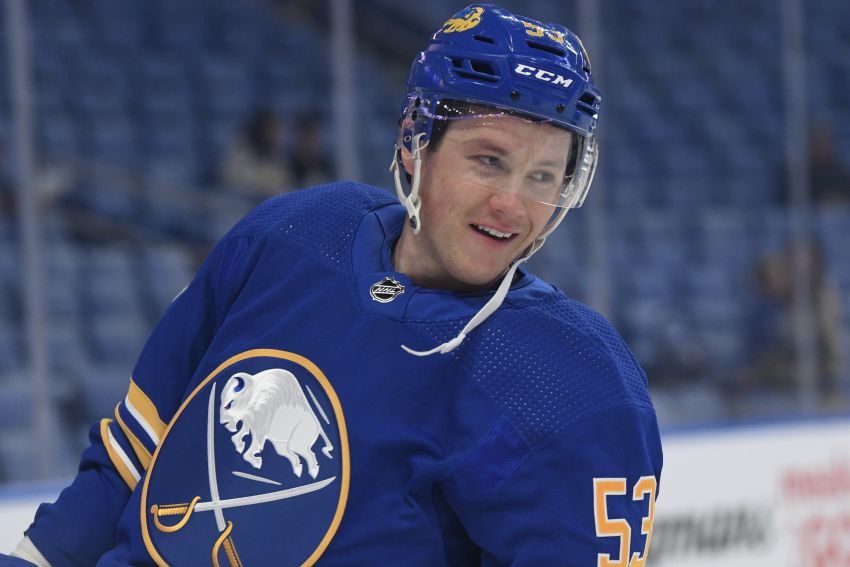 BUFFALO – It took time for Jeff Skinner to recapture his scoring prowess after enduring a miserable, career-worst season. The Sabres winger scored just once in the first eight games of what has become a terrific comeback year.

But from the get-go this season, Sabres coach Don Granato saw Skinner, 29, possessed confidence he would resolve his problems and was hellbent on becoming a go-to guy again.

Granato said Skinner began practicing and playing with more intent. When results did not immediately follow, the 12-year veteran kept at it.

“I’m watching that and I want to invest in the player,” Granato said following Tuesday afternoon’s practice inside KeyBank Center, the Sabres’ first following the NHL All-Star break. “You give him ice time and you tell 15 other guys, every time you make a line change, you say, ‘You 15, you wait here.’”

Skinner, who has scored a team-high 16 goals this season, responded to every challenge Granato gave him, so he kept earning more and more.

“And he continues to be able to handle more and more,” Granato said.

Skinner’s resurgence has quietly become one of the NHL’s feel-good stories. A year ago, he scored just seven times in 56 games and did not record his first goal until his 20th outing. After his 14th straight goalless game, ex-coach Ralph Krueger benched him three straight contests, the first time he had ever been a healthy scratch.

In addition to experiencing that embarrassment, Skinner also practiced with the taxi squad one day.

Two years removed from a career-best 40-goal season, Skinner’s best days looked behind him. Few figured he would bounce back like he has through his first 43 games this season.

Skinner entered the NHL All-Star break scoring at a 30-goal pace. He has scored at least 30 goals, one of hockey’s prestigious numbers, four times in his career.

Prior to four goalless outings before the break, he scored eight goals over a 12-game stretch.

Not surprisingly, Skinner’s other numbers have also ballooned. His ice time has jumped to 17 minutes, 4 seconds a game, nearly 2 and a half minutes higher than last season. He has recorded 28 points, 14 more than a year ago in 13 fewer appearances.

His shooting percentage has nearly doubled to 12 percent, up from a career-worst 6.3 percent.

In less than one year on the job, Granato has demonstrated an ability to get the most out of players who had been struggling or underachieving. To score regularly, Granato knows Skinner must be put in positions to succeed.

Under Krueger last season, Skinner often played short minutes on the fourth line. Skinner has spent all of this year on a scoring line, mostly beside center Tage Thompson. Newcomer Alex Tuch recently joined them at right wing.

Granato has also utilized Skinner in the offensive zone for 59.3 percent of his five-on-five faceoffs, up from 51.7 percent last season.

“When you have success or anyone has success, there’s obviously like a combination of a lot of things that have to sort of pan out,” Skinner said. “Yeah, I have gotten the opportunity. He has put me in the opportunity to succeed. As a player, you kind of want to prove him right when he does. I think we’ve just gotten in a pretty good groove as a line, which has helped.”

Skinner and Thompson, who switched to center at the end of training camp, have quickly developed strong chemistry. But Skinner has been playing so well Granato believes he would thrive beside any pivot.

“Everyone knows him as scorer, but he’s an intelligent person and intelligent hockey player,” Granato said. “So he’s a guy that’s a chemistry guy. And I’ve watched that as a coach and I’ve thought, I need to help him find chemistry, if there’s something we can do from the coaching side.

“And now that Skinny has confidence, he’s actually good with anybody. He’s found his game a little bit more.”