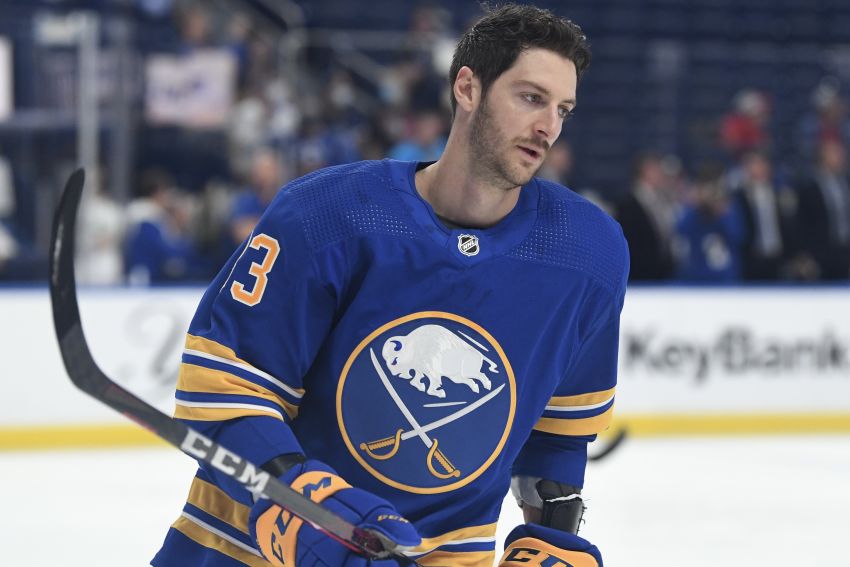 Colin Miller is in his third season in Buffalo. ©2022, Micheline Veluvolu

BUFFALO – Expect a quiet deadline day for the Sabres. General manager Kevyn Adams made one trade Sunday, sending defenseman Robert Hagg to the Florida Panthers. Perhaps a few more veterans on expiring contracts will be dealt before 3 p.m.

This deadline lacks the intrigue of a year ago, when Adams was trying to trade winger Taylor Hall, a free agent bust, or in 2020, when ex-GM Jason Botterill loaded up for a playoff push that quickly fizzled.

“It’s very different than last year just with the way last year was with Taylor’s situation we had, a no-move clause, it was very complicated,” Adams told the Times Herald on Wednesday.

Of course, Adams, said he’s open to anything that will improve the rebuilding Sabres. Having overhauled the roster during the last nine months, he has stockpiled 10 picks in this year’s draft, including three first-rounders and two seconds. They received a sixth-round pick in 2022 in exchange for Hagg.

The Sabres have the assets to make a significant move that could land them a player ready to step into the lineup.

Still, given how well many of the youngsters on the roster have performed and the prospects expected to join the Sabres in the near future, they may opt for smaller moves and wait for the offseason to add some missing pieces.

“We’re in a situation where we’re open to figuring out a way as long as we think something’s going to help our franchise,” Adams said.

The Sabres have become a tight-knit group this season, and by the end of today, some popular players could be on new teams.

“That’s something that is a natural step of growing up of becoming a team,” Sabres winger Kyle Okposo said Tuesday of players potentially leaving. “You got to learn also that that is a business and that there’s a lot of tough decisions that are going to be made. And you have to learn how to interact with different people that are going to come in, figure out your team dynamics when people depart, too.

“That’s something that is laid in the foundation of guys that are going to be here, is you want people to be able to come in and step in seamlessly and be able to feel comfortable in being completely themselves.”

The 6-foot-2, 207-pound Hagg, 27, is in the second season of a two-year, $3.2 million contract. The Sabres acquired Hagg on July 23 from the Philadelphia Flyers in the Rasmus Ristolainen trade.

The Swede compiled one goal, eight points and a minus-9 rating in 48 games with the Sabres. His 91 blocked shots and 97 hits both ranked first on the team entering Sunday’s road game against the Vancouver Canucks.

“(Hagg) blocked shots and he was ready for practice every day and added some life and energy from the compete side, he’s a competitive guy,” Sabres coach Don Granato told reporters in Vancouver. “So we certainly wish him well and we certainly appreciate the commitment he had. When he put that jersey over his head, he was as committed as anybody.”

While Hagg established himself as one of the Sabres’ top penalty killers, he recently lost his regular spot in the lineup as rookie defensemen Casey Fitzgerald and Mattias Samuelsson emerged.

“He is a very, very important part of our success,” Granato said of Samuelsson. “I mean, when he’s in the lineup for us, we are a much more successful team in just areas of defensive responsibilities. He’s an incredible athlete. His size and strength and reach exceeded the average in the NHL from Day One.”

The Panthers, whose 90 points rank first in the Eastern Conference, have been loading up for a playoff run. In addition to Hagg, they’ve recently acquired forward Claude Giroux and defenseman Ben Chariot.