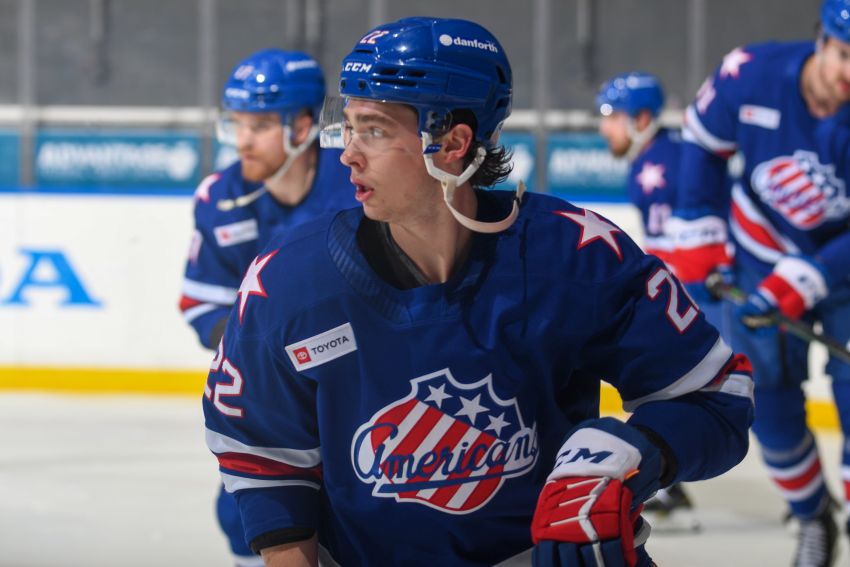 How significant is that? Well, in establishing himself as one of the AHL premier talents this season, Quinn never went more than two games without recording a point.

“As an offensive player, we all want to produce and score,” Quinn said following Thursday’s practice at Blue Cross Arena. “Frustration is definitely there when that’s not happening, and that was at times in the regular season, too, not just playoffs.”

Still, Quinn’s recent trouble producing offense underscores how the postseason is a tighter and more physical brand of hockey.

That target on his back is much bigger. Suddenly, the opposition is coming at him more often, cross-checking, holding and doing whatever it can to stymie him.

“Everything’s ramped up, so there’s a little less time and space,” Quinn said.

Of course, Quinn, the eighth overall pick in 2020, knew the intensity would be ratcheted up in the Calder Cup Playoffs. But until he experienced his first taste of the postseason as a pro, he wouldn’t truly understand how different it can be.

Facing two heavy teams in the Belleville Senators and Utica Comets – “They’re big, they’re physical, they’re older,” Amerks coach Seth Appert said – has forced Quinn and some of the other young forwards to adjust and find other ways to contribute.

“You have to go through it, and then you start finding where you can gain your own advantages through your skill, your intelligence, your speed, things of that nature,” Appert said.

So far, Appert said he has seen “glimpses of that” from Quinn, his linemates Peyton Krebs and JJ Peterka, and some of the other prospects.

“You see moments where they find those things,” Appert said. “And now they just got to keep fighting to find those more consistently.”

The 6-foot, 176-pound Quinn pumped six shots on goal during the Amerks’ two-game sweep of Belleville in the play-in round. He registered two shots in Tuesday’s 6-3 loss in Utica in Game 1 of the best-of-five North Division semifinal.

“I know I’ll get my looks and try to break through eventually,” Quinn said.

When Quinn’s looking for answers, he often talks to Appert.

“Jack and I talk a lot,” Appert said. “Jack and I have forged a pretty close relationship.”

During Quinn’s 15-game stint with the Amerks last season, Appert tried to help a teenager who was supposed to be in junior adjust to playing hockey against men.

“We went through a lot of things together, both good and bad,” Appert said. “And I think when you go through adversity, you build shared trust in each other. So he does come, he’s like, ‘What are you seeing? Where can I take advantage or more? What do you think?’

“And that’s normal, and I ask him that, too, because I trust him implicitly because he’s all team, all the time.”

Amerks defenseman Mattias Samuelsson, who has been dealing with an ankle/foot injury since returning from the Sabres, practiced Thursday.

“It didn’t seem to inflame the issue anymore, and so medically and himself they felt that, OK, let’s have a full practice and then see where that goes, see how it looks out there, then also see how he responds from it tomorrow,” Appert said.

Meanwhile, Appert said injured defenseman Brandon Davidson is probable to play one or both of this weekend’s game.

The Amerks play Game 2 on Saturday in Utica before hosting the Comets on Sunday afternoon.