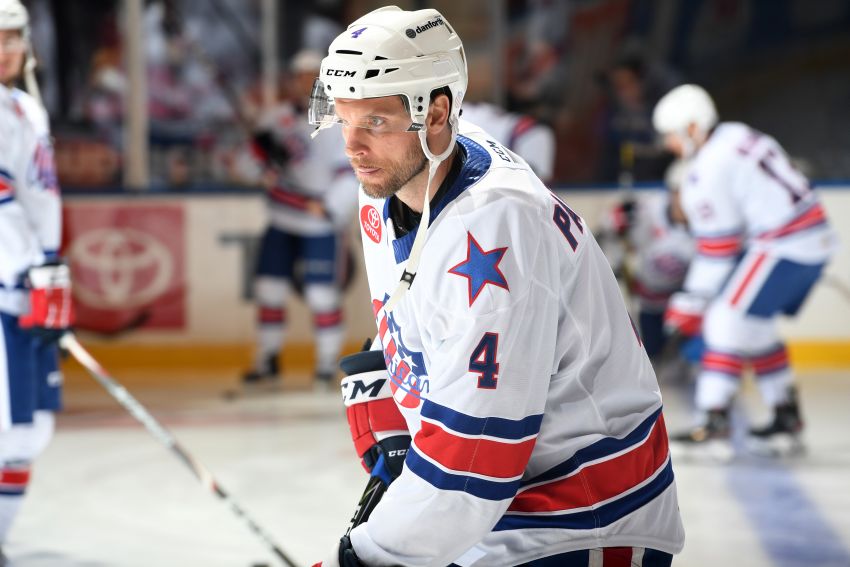 Nathan Paetsch spent most of 2005-06 in Rochester before going up to Buffalo. ©2020, Micheline Veluvolu, Rochester Americans

In April, when MSG replayed the Buffalo Sabres’ gut-wrenching Game 7 loss from 2006, Nathan Paetsch decided it was time to relive the craziest night of his NHL career.

For almost 14 years, the defeat stung so badly that Paetsch, who retired Friday, avoided watching the final game of the classic Eastern Conference final series against the Carolina Hurricanes.

“I never looked back on it,” Paetsch said of the memorable 4-2 loss during a Zoom call Friday.

That loss, of course, cost the Sabres a trip to the Stanley Cup final. The series remains one of the wildest in franchise history.

The upstart Sabres seemed destined to win a championship. They roared through the first two rounds of the playoffs, annihilating the Philadelphia Flyers before upsetting the heavyweight Ottawa Senators.

Then injuries started decimating Buffalo’s defense corps. After losing Dmitri Kalinin to an ankle injury in the Ottawa series, Teppo Numminen suffered a hip flexor in Game 2 against the Hurricanes. Then Henrik Tallinder broke his arm the next game.

Suddenly, the Sabres needed to utilize depth defensemen Rory Fitzpatrick, Doug Janik and Jeff Jillson. Paetsch, meanwhile, had been practicing as an extra in the another group after the Rochester Americans’ season ended.

Earlier that year, Paetsch had played his first NHL game, recording an assist Jan. 6. But the Sabres had recalled the rookie late and sent right back down.

“My first NHL practice with the team was in Carolina, I want to say before Game 5 was when I joined the actual team,” Paetsch said. “And then things obviously escalated.”

They intensified before Game 7 on June 1, 2006 at RBC Center in Raleigh. After the Sabres had roared back to tie the series, Jay McKee, one of only three healthy regular defensemen, suffered an infection in his leg.

“All of a sudden, I end up getting thrown in,” Paetsch said.

So Paetsch, then 23, played what would be his only NHL playoff game having practiced only a few times.

“It’s hard to look back, as it was a blur,” he said of that time. “There was just so much emotion and so (many) different things going on, it’s almost like you black out and can’t remember.”

The Sabres started the third period leading 2-1 before buckling late. Paetsch played just over 12 minutes. Despite having to relive the toughest loss of his career, he enjoyed watching the game with his son, Kellen.

“It was special to be able to … see myself back then,” Paetsch said. “And (for) my son to be able to watch that game, it was pretty cool and something I’ll always cherish. Obviously, I wish we would’ve won that game. Who knows what would’ve happened? But it was still a special part of my career.”

That career lasted 17 seasons. Paetsch played 870 games as a pro, including 157 contests with the Sabres. He compiled 23 goals and 100 points in 258 career games with the Amerks in parts of seven seasons over three stints.

Paetsch, who lives in Spencerport, embraced a new role when he returned to Rochester three years ago. He played sparingly – just 21 appearances over the last two seasons – but enjoyed mentoring Sabres prospects.

“My wife and I had talked years ago, like how cool would it be to go through your career and then finish back in Rochester, your home?” said Paetsch, who would occasionally play forward. “I was so lucky to be able to do that.”

The affable Paetsch has taken a job with BioSteel, a Canadian-based company that produces nutrition products for athletes. He will deal with NHL, AHL and other teams in the Northeast. He said he also interviewed for some coaching jobs.

Paetsch, who plans to remain active in the community, said he knew four or five months ago he would likely retire.

In his final game Feb. 5, he celebrated his 66th and final goal as a pro by honoring his son and replicating his goal celebration, the “Kellen Wiggle.”

“For that to be my last game and my last goal ever, and to be able to be able to pass the torch to my son, who’s a hockey player now, I feel, looking back, it was really fitting,” Paetsch said. “And I can’t think of a better way to move on in my career.”

Bailey, 25, scored 28 goals and 47 points in 53 games with the Utica Comets last season. The winger also played two games with the Canucks and joined them in the Edmonton “bubble” for their playoff run.